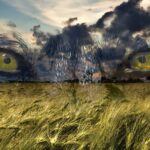 Writing 1000 words a day, the sequel to First Wolf, in six weeks and the first draft should be finished. Then the hard work of editing begins. I’ve returned to writing books in a way that works. I began a book for grown-ups, plotting the story in every detail, but following detailed scenes knocks the stuffing out of the book. The Stephen King method works for me. In his brilliant book, On Writing, he says he thinks through the plot – few sentences, a rough idea is enough – and then he writes. But I think you must have a good grasp of how to write in the first place, before this method works. #writing #writing #editing #StephenKing, #plotting